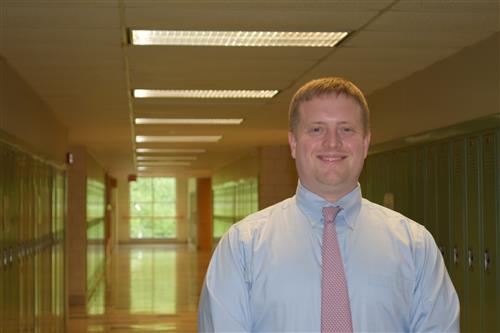 CB West teacher Mark Hayden has been awarded Drexel University’s prestigious 2019 Harold W. Pote "Behind Every Graduate Award," after being nominated by a former student, Isabel Wingert, who will graduate this year from Drexel University's College of Biomedical Engineering, Science & Health Systems.

Graduating Drexel seniors are invited to nominate a special high school teacher who inspired them to pursue a college education as they embark on their careers. Isabel wrote about Mr. Hayden, and the impact and impression he made on her as a teacher.

"He was my favorite teacher during my time in high school, because he was so invested in my success as a student outside of the classroom, and he was more than willing to put in time outside of his teaching and personal commitments to help me with class material whenever I needed it," Isobel wrote.

She notes that one of Mr. Hayden’s biggest contributions to her growth as an engineer was the building of the STEM Research Club (then Science Research Club) at CB West. Isobel explained how the club allowed her to expand her understanding of cutting-edge esearch, increase her exposure to technology, and network with professors and scientists working in the field.

"Within the club, I had not only grown into a student that can defend theoretical, ethical, and design aspects of an experiment from seeing and conducting experiments, but I became an incoming engineering student who knew of the importance of keeping up to date on trends in STEM," she wrote.

"Knowing Mr. Hayden and having him as a teacher has had an incredible impact on me in several ways: when I saw his altruism, it drove me to biomedical engineering, and it made me create a goal for myself to become a versed engineer ready to take on the world," Isobel added, " In every sense, Mr. Hayden deserves to be recognized for his years of hard work and support for me and countless other students. I cannot think of a more deserving teacher for this award."

He was chairman of the University’s Enrollment Management Committee and College of Medicine’s finance committee. In both capacities he served tirelessly and passionately as an advocate of the University.

Because of the importance of superb teachers to the students that Mr. Pote sought for Drexel, the University is honored him by endowing the Harold W. Pote “Behind Every Graduate” Award for Excellence in Secondary Teaching.